I remember watching TV Serial Mahabharat, like most of us. However, they rendered this shloka as a song. It was quite impressive to listen to the shloka in the form of a song. This shloka is from the sacred Bhagawat Gita. As opposed to what is mistakenly narrated by many people as “Yadha Yadhaya Dharmasya“, the actual narration goes as follows: Yada Yada Hi Dharmasya. Krishna advises Arjuna (also called Partha, Kaunteya, Bhārata…).

Yada Yada hi Dharmasya shloka is the 7th verse of chapter 4. It is easy to understand the literal meaning. In other words, when we directly translate this shloka from Sanskrit to English. Here you go.

What is the meaning of Yada Yada hi Dharmasya?

Whenever, Whenever, righteousness (which is the closest word to Dharma in English) declines, when evil arises (perhaps in your mind), Arjuna or anyone else’s mind, then is when I take birth, in your soul (could be body, brain, mind, soul)!

Does it sound confusing? No, not really. Let us divide the following shloka into several parts. The complete shloka goes as below:

You notice here that the word Yada is deliberately used twice. This is just to stress the importance of whenever. It could be like only whenever (on the trigger of something), not otherwise.

Dharma can be explained better in two contexts. In other words, it can be concerning to society, or to the individual.

When it comes to society, there are many types of dharma. This is mostly for the understanding of one another. For instance, there is;

this Dharma indicates what is the responsibility of a mother. How she should be taking care of the child. Why is she referred to as god etc?

this Dharma, just like that of the mother, how a father should take care of the family. What should he do in terms of calamity, or dangerous situations, etc?

Acharya Dharma speaks about how should his disciples be mentored. Where he should teach. What a guru has to teach his pupils.

If you observed the above Dharma’s, they are all related. They cannot be followed without considering each other. In other words, Matru Dharma considers the social relationship between the mother and the child. Further, even Pitru Dharma and Acharya Dharma work the same way. There is a mutual connection. This connection is called as Social Dharma.

Here, the stress is given to the individuals, and they are conceptual Dharmas. Following these Dharmas, an individual evolves from a mere mortal to a greater soul.

As may be said in any language in India:

A human being consistently following the Dharma like how to:

Let us analyze this very point further. We shall consider the following shloka that Bhishma advises Yudhishtira, also called Dharmaraj. 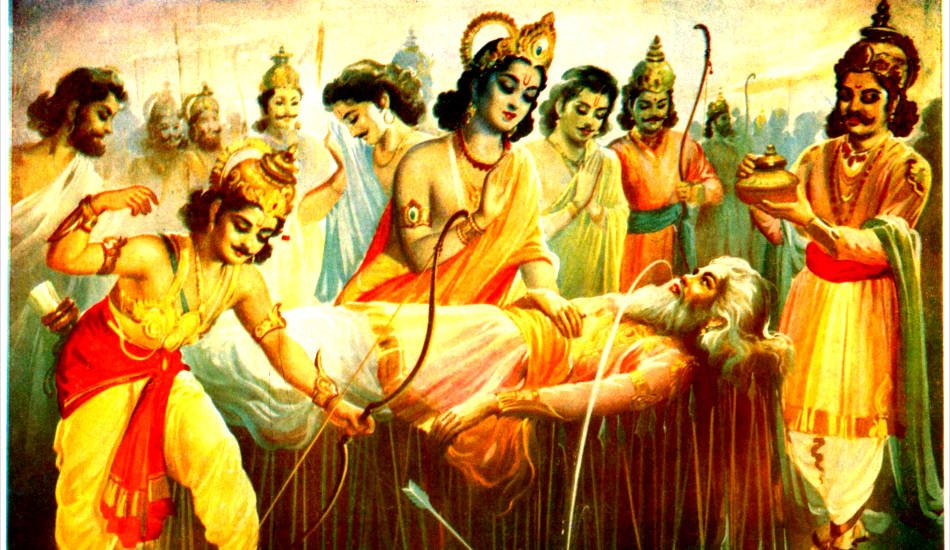 In conclusion, the above shloka is an outcome of Dharma. In other words, every citizen should follow both the individual as mentioned earlier and social dharma. As a result,

People protect each other by the virtue of Dharma. Dharma is quite natural and instills long-lasting happiness amongst everyone. Though this shloka might look ideal, it is not impossible to follow, at least to a certain extent.

Bhishma tells this to Yudhishtira, also known as Dharmaraj that, how good a rule book should be. It should be in favor of every person. Therefore, everyone should enjoy both individually and in society.

Lastly, let us understand this important point that religion is nowhere an equivalent word to Dharma. Religion derives from the word, “Religate“. To relegate means sending to a lower level. In other words, religion means the one that sends us to a lower level. So, this word is inappropriate.

To sum up, this is the kind of Dharma that the shloka is trying to explain to us. That is to say that, when the citizens do not follow Dharma, it is a natural cause of concern.

The declination of Dharma or in other words, Dharma’s dilution. There are so many instances where humans easily compromise on Dharma.

For instance, a teacher might compromise on their teachings, by diluting the syllabus to be covered. This is social dharma compromised. This has an impact on the students, maybe at a later stage, when they are not in good positions to handle their work.

Similarly, a father getting addicted to alcohol. This for sure disturbs the whole family. Subsequently, it might traumatize the wife and children, devastating the whole family. What we are talking about might look small, but they are still Adharma. When Dushyasana, on the order of Duryodhana, disrobed Draupadi, insulting her, the act could be the cheapest act to the core. These could be some instances that show the declination of Dharma.

Adharma is the opposite word to Dharma. Most importantly, if we don’t follow dharma, it means that we are on the side of Adharma. More and more of such atrocities prove to give birth to evil. Subsequently, this evil will contribute to a bad society.  To sum up, evil actions are a part of our very own ideas.

Ideas take birth in our minds. Our mind is a part of us. In short, the culprit is our mind. Keep this in mind while we try to move ahead to the next phase.

I re-incarnate in your soul. Firstly, I would like to bring to your notice that Sanskrit has several meanings for a single word. For eg., if you consider “amritam“, the first thing that comes to our mind is Nectar. This is of course true. However, one of the other meanings of amritam is also water. Water is called by the following words.

If you did not notice, we have marked

Being bold from the above list. The list of words is all synonyms of the word water. These and other words are all a part of Amarakosha. Amarakosha is an authentic dictionary of Sanskrit. Words and their synonyms are written in the form of Shlokas. Sanskrit is awesome!

is used in a different context, with a different meaning. In this context it can be any of the following:

Reactions are an outcome of our Actions. In this regard, if the part of the action is related to the body, Krishna tells, he uses our body as a medium and warns us. It is now, our responsibility to be warned and follow Dharma. However, by not doing so, we might have to face the consequence all by ourselves.

This shloka is a part of Bhagawat Gita. As part of Yada Yada Hi Dharmasya shloka meaning, Krishna has clearly told us that we are responsible for what we are. If we bring out the godly part that is within us, we will follow dharma.

On the other hand, if we bring out the demon that is within us, we are bound to follow dharma. We should not wait for a god in a form or shape to incarnate and protect us. That will be like saying that we will only sit and wait. We should not stop waiting to protect ourselves from third-party atrocities.  If we have to do that, this shloka would be an inspiration.

What is some archival information about Nalanda University?

11 benefits and directions of Trikala Sandhyavandanam