We were driving in Vadodara. When suddenly I could not let go of the board. It caught my eyes. Further, it read Nalanda Academy for Chemistry. As soon as we see Nalanda, the first thing that comes to our mind is the great Nalanda University. Unfortunately, we deleted this from our very own history. There are very few people who can shed light on this topic.

Nālanda University is one of the oldest universities in the world. The history has given credit to Gupta’s, specifically Kumargupta (400 CE). He was also called Śakrāditya. However, it continued to survive until 1200 CE. when Bhakitiyar Khalji burnt and destroyed the whole place, including the monks and students.

We can see Nalanda University ruins in Bihar, India. It is about 95 km. southeast from the city of Patna. In our culture, we used to learn at Gurukuls. They used to concentrate more on life skills with academics. However, for people who wanted to study further, the universities were an option. Other universities were famous too. Like Takshashila, Vikramashila to name a few.

The connection between Guptas and Nalanda University

Guptas built a big beautiful university. This could help students in advance studies. Gupta’s were known for their futuristic thinking. However, there are early establishments of some buildings that were constructed in the Mauryan Empire, by Ashoka the Great (273 – 232 BCE). 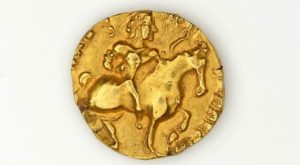 Who were the Guptas?

India has witnessed many great kings and kinsmen. In addition, the great poet Kalidasa in his book Raghuvamsham has mentioned a lot about Guptas. This has inspired many historians to take a peek into this golden period of Indian History. There are a lot of historical facts to support this. Archaeological department and literary sources, both have supported this claim.

As part of the Archeological Department:

The Literary sources throwing light on the period are:

How was Nalanda University Founded?

Kumaragupta, a Gupta ruler (415 -455 CE) is also known as Mahendraditya. Mahendra was another name for Indra. The name Indra inspired him. He also mixed the word Aditya from Vikramaditya, his predecessor. Shakra is another name of Indra. So, his name in some places is also mentioned in the name – Shakraditya. All these names refer to Kumargupta I.

This further led to another idea of building a place for higher education. Devaki knew about the big university erected at Takshashila. The university had produced not only great teachers like Chanakya but also great students like Chandragupta Maurya. Though Gurukul’s imparted very good education, there were no specializations in the subjects. So, higher education would certainly help. The very same day, a Buddhist philosopher came to meet Kumargupta. He also came up with the same idea. He further said they will have to teach Buddhist Philosophy along with the Vedic Philosophy.

How was Nalanda University planned?

The immediate action points that Kumaragupta acted upon are:

After deciding upon this, he called Buddhist and Vedic philosophers. Along with them, eminent doctors, philosophers, and scientists had a brainstorming session about the university. The king boiled down on the place. He decided that the university be built near the Nalo Stupa. Hence, it would be called Nalanda University, deriving its name from the Stupa.

It was also decided that the university will be a huge complex, with quarters for teachers and dormitories for students. The capacity of the university will be about ten thousand students and accommodating about two thousand teachers. It would be a multi-storied building surrounded by a high wall, made of red bricks. There will be a garden and some lakes inside the campus. Students and teachers can meditate here with meditation halls and temples built inside.

They further decided that it would have three libraries, covering books from every other topic. However, admission will be restricted to students strictly on the basis of merit. Entrance tests will be conducted and students clearing the tests will be allowed to study. Men with very good command over their subjects will be teaching here. Local revenue from the neighboring villages will be used to maintain the university. Kumargupta summoned the best architects to construct the university.

How was Nalanda University Constructed?

Construction of Nalanda University started soon. Kumargupta was all excited and wanted it to be completed soon. Meanwhile, the two queens of Kumargupta gave birth. While Anantadevi’s son was named “Purugupta”, Devaki’s son was named “Skandagupta”. Both of them were very different in their own ways.

Purugupta was more interested to be alone and had no intentions of making friends. He was very silent. His favorite pastime was watching birds, trees, sky, etc. Skandagupta, on the other hand, was more social. Firstly, he was always surrounded by people. Secondly, he was very talkative and always made sense while he spoke. Lastly, he made friends and used to play a lot. When he played, he was always the king and his friends were ministers. The qualities required to rule the kingdom could be seen in Skandagupta, right from his childhood days.

While the university was still under construction, Kumargupta’s brother came to meet him. He was also very happy about his brother building a secular place of learning. He was sure that it would be very famous. Further, he said, he wanted to see a Vishnu temple built inside the campus, having the ten incarnations. Kumargupta was happy about this idea. Subsequently, he transferred his brother from Vaishali to Ujjain as the governer. So, his brother could build the Vishnu Temple inside the campus. No wonder, the temple was beautifully built. It looked spectacular. This way, Kumargupta involved more or less everyone who was interested in serving the society and gave them apt responsibilities.

Finally, Nalanda University’s construction was completed. Kumargupta himself appointed the close associate that he trusted as the head of the university. The head, in turn, appointed many good teachers. Many student aspirants applied. There was a very tough test conducted and only those who qualified were admitted. It was a magnificent multi-storied building. There were nine floors. A huge ground to play and a big library for the students. There were several classes and dormitories to help students.

Kumargupta himself inaugurated the university. He even went and sat in the first class. The level of ownership that he showed is unparalleled. He was sure that the university was going to be world-famous and he was right. It indeed became world-famous.

The decline of the Guptas

After the Guptas, there was a large succession of kings who continued protecting the university in their own ways. Some of them even built big walls as a way to protect the university. Maukhari Dynasty king erected an 80 feet copper statue of Buddha. Harsha, the converted king, also took good care of it in the 7th century. All of this is known based on the travelogues of Chinese monks, Xuanzang (Si-Yu-Ki) and Yijing.

Who destroyed Nalanda University and why?

Nalanda University has been destroyed thrice, based on different invaders at different times. In the first two invasions, the university could be restored. But the final destruction became a setback for both Buddhism and the University for hundreds of years.

Bakhtiyar Khilji was a fanatic Islamist, who did not believe in any other opinions or texts. He was not keeping well for a few days and the doctors in his court failed to cure him. Rahul Sri Bhadra was the principal of Nalanda University then. He was advised by one of the ministers of Bakhitiyar to treat him. Initially, Bakhtiyar was reluctant to get treated by him as it was against his religion. But, when the disease further deteriorated, he had to summon the principal.

Bakhityar, however, agreed on a condition and they arranged the treatment. The condition is that the principal should cure without any medicine. The principal then asked Bakhitiyar to read some pages from the Koran, which cured the illness to everyone’s surprise. This disturbed Khilji. He thought Indian scholars and teachers knew more than what the doctors at his court knew. So, Khilji decided to destroy the roots of knowledge. He set fire to the great library of Nalanda University following the massacre of both teachers and students. He burnt down approximately nine million manuscripts.

Unfortunately, we have a town built in the name of Bakhtiyar Khilji called Bakhityarpur.

We have to learn from history as there is a famous saying: Forgive but never forget history. We should make sure that we don’t repeat these parts of history. These thoughts mingled in my mind for that whole day.

PakkaPatriot is a name, a place, an animal or a thing that is involved directly or indirectly in a patriotic and nationalistic movement, to increase the average patriotism of a common man in India, by stressing on its integrity, diversity, and localization.

This site is owned and operated by PakkaPatriot. PakkaPatriot.com is a participant in the Amazon Services LLC Associates Program, an affiliate advertising program designed to provide a means for sites to earn advertising fees by advertising and linking to Amazon.com. This site also participates in other affiliate programs and is compensated for referring traffic and business to these companies.